IH Trainer Paddy Gracey, based in Wigan, Lancashire, uses non-violent techniques on abused and ill-treated animals. He has a vast of experience working with the horses with behavioural problems, also young horses, and untouched horses.

Paddy produces some brilliant content on his social media as The Horse Shrink, including regular videos of him at work.He also does an amazing amount of work for his local community; mentoring children from Wigan Council Children and Young People’s Service, Wigan Connexions and Newbridge Learning Community in Platt Bridge.

I’ve been involved with horses for 24 years, it all started when my wife who grew up with horses decided that our daughter was going to have a childhood that would keep her occupied and away from boys. She was only 3 and she’d never sat on a pony but it turned out to be a good move as she dedicated her life to horses. We are still in touch with the pony after we sold him on 18 years ago.

What three things should everyone practice with their horses?

The three things that everyone should practice is teaching your horse to respect your personal space, standing still and leading.

What’s the best bit of advice you’ve ever been given?

The best advice I was given was by Monty at Myerscough college. I was loading a horse after a demo and the horse was pulling down the ramp during a loading session, Monty and Kelly were walking past Monty had his cowboy hat on and in his Californian accent he said “ whoa there Paddy you never allow the horse to move your feet, let the line go squeeze and release “ I took his advice and the horse loaded without any further issue.

What has been the proudest moment/biggest achievement in your career?

Pearly King HOYS Supreme Champion had an accident in a box and his owner thought his showing days were over, so I trained Pearly King to travel safely again, it was a proud moment for me when he went back to HOYS again and won Click on the pictures below. Just another day as the office for the Horseshrink. For more information and contact Paddy click link at address below. 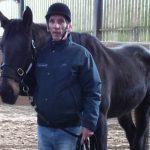